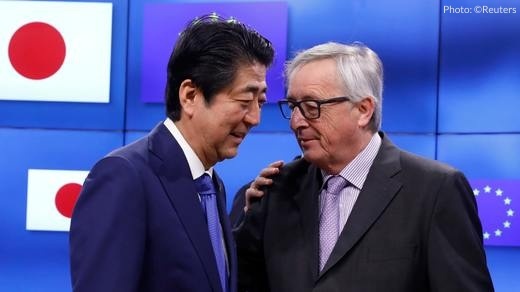 Leaders from Japan and the European Union finished touches on the EU-Japan Economic Partnership Agreement with a signing ceremony in Tokyo.

The deal agreed by the EU "the world's largest economy when taken as a whole" and Japan, the fourth-largest, represents nearly 30% of global economic output. It will be the largest trade bloc in history, although some experts say the agreement is mostly symbolic.

Here are five things to know about the Japan-EU agreement.

1) How did the deal come about?
Negotiations started in 2011 when former Prime Minister Naoto Kan and Herman van Rompuy, then president of the European Council, began exploratory talks. The official negotiations were launched in April 2013, with the goal of concluding the deal by the end of 2015. But the discussions became bogged down as the Europeans held out for a better deal on exports of dairy products.

The negotiations regained momentum in 2017, with the two sides reaching an agreement in principle in July of that year. With Donald Trump winning the White House in 2016 and putting in place protectionist trade policies, the EU, estranged from Washington, had additional motivation to forge a deal with Japan.

The two sides wrapped up the talks in December 2017. The signing was originally scheduled to take place in Brussels on July 11, but it was moved to Tokyo after Prime Minister Shinzo Abe canceled his trip to Europe following deadly floods in western Japan earlier this month.

After the signing, Japan and the EU will have their parliaments ratify the agreement. They hope to complete the ratification process and bring the deal into force by March 2019, before the U.K. exits from the EU.

2) How will it benefit the EU?
Although Japan's economy is the world's fourth largest, following the EU, the U.S. and China, it is only Europe's seventh-largest export market. The new deal will gradually make it easier for European countries expand exports of goods and services to Japan, which totaled 58 billion euros ($68 billion) and 28 billion euros, respectively, last year.

The Europeans stand to gain the most from exports of consumer products, especially food. As soon as the deal takes effect, Japan will scrap duties on European wines. Tariffs on cheese, pork and leather goods will also be removed or lowered.

"We hope that we will be able to triple our agricultural exports. EU exports to Japan overall could, according to our calculations, be boosted by one-third," said EU Trade Commissioner Cecilia Malmstrom.

3) How will it benefit Japan?
Japan's main interest in a trade deal with Europe was to increase its auto exports. The EU currently imposes a 10% tariff on Japanese cars. Under the agreement, it will lower this to zero over eight years. Although cars and auto components account for about a fifth of Japan's exports to Europe, Japanese carmakers' share of the European market is only about 10%, much lower than in the U.S. or Asia.

The agreement will allow Japanese carmakers to compete on a more even footing, but they are in for a fierce battle. As countries such as France have announced plans to halt the sale of gasoline- and diesel-fueled vehicles by 2040, European automakers are investing heavily in the development of electric cars. Japanese manufacturers may not benefit much from the lower tariffs if they fail to respond to a rapidly changing market in Europe.

The deal is seen as strongly reaffirming the rules-based international trading system. The concessions Japan offered to the EU on agricultural products are a blow to U.S. farmers, which had been hoping for a long time to pry open Japan's sealed market.

Although wine, cheese and pork are not big U.S. exports, the EU-Japan deal will add to the unease of U.S. agricultural interests, which are an important power base for Trump and his Republican Party.

Japan has played a big role in both agreements. The EU-Japan deal will emphasize Japan's commitment to free trade and give a further push to the other two pacts. Thailand and Colombia have already signaled their intent to join the CPTPP.