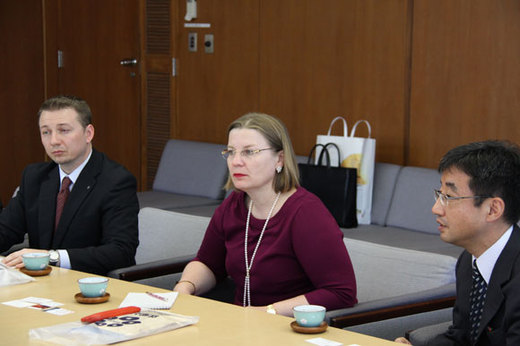 Chairman and Vice-Chairman of CCCIJ together with Ambassador of the Czech Republic H.E. Kateřina Fialková and other staff of the Czech Embassy visited Shinshu University, Mr. Motai - Mayor of the Ueda City (Nagano pref.) and Chamber of Commerce and Industry in Ueda.

At the end of this trip we visited Ueda Castle and was surprised by private concert for Ambassador Fialková. Czech music at the Ueda Castle. All was arranged by Mr. Anzai, who is friend and supporter for cooperation between Ueda City and Czech Republic.

During this friendship visit we introduced Czech Republic and mentioned our plans for friendship partnership between cities Ueda and Liberec in the Czech Republic. Those two cities have a many similarities which can connect them into international cooperation.