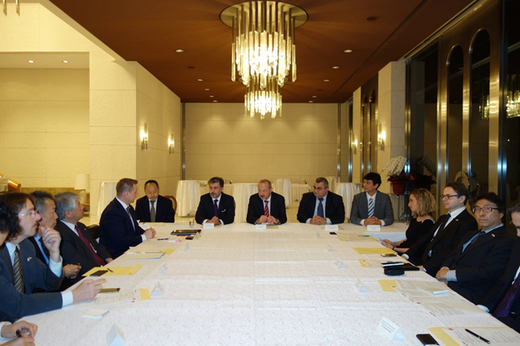 During the meeting all participants has discussion for better V4 partnership and friendship in Japan and discussed to organize V4 event in the future. Mr. Roman Watanabe, Chairman of the Czech Chamber of Commerce and Industry in Japan (CCCIJ) moderated discussion under bellow agenda:

About the Visegrad Group

The Visegrad Group (also known as the "Visegrad Four" or simply "V4") reflects the efforts of the countries of the Central European region to work together in a number of fields of common interest within the all-European integration. The Czech Republic, Hungary, Poland and Slovakia have always been part of a single civilization sharing cultural and intellectual values and common roots in diverse religious traditions, which they wish to preserve and further strengthen.
All the V4 countries aspired to become members of the European Union, perceiving their integration in the EU as another step forward in the process of overcoming artificial dividing lines in Europe through mutual support. They reached this aim in 2004 (1st May) when they all became members of the EU.
The V4 was not created as an alternative to the all-European integration efforts, not does it try to compete with the existing functional Central European structures. Its activities are in no way aimed at isolation or the weakening of ties with the other countries. On the contrary the Group aims at encouraging optimum cooperation with all countries, in particular its neighbors, its ultimate interest being the democratic development in all parts of Europe.
The Visegrad Group wishes to contribute towards building the European security architecture based on effective, functionally complementary and mutually reinforcing cooperation and coordination within existing European and transatlantic institutions.

In order to preserve and promote cultural cohesion, cooperation within the Visegrad Group will enhance the imparting of values in the field of culture, education, science and exchange of information. All the activities of the Visegrad Group are aimed at strengthening stability in the Central European region. The participating countries perceive their cooperation as a challenge and its success as the best proof of their ability to integrate also into such structures, such as the European Union.