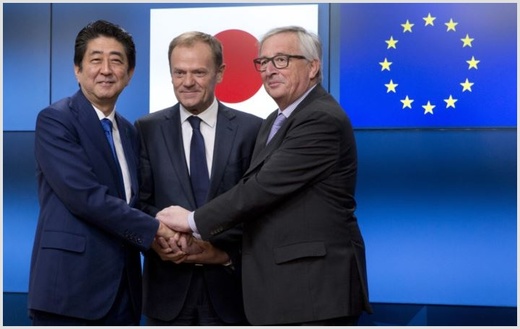 European Union (EU) and Japan have signed Economic Partnership Agreement (EPA) in July 2018. It was signed at EU-Japan summit in Tokyo by EU Presidents Jean-Claude Juncker and Donald Tusk and Japanese Prime Minister Shinzo Abe. It is biggest ever trade deal negotiated by the EU and creates free trade zone covering nearly third of the world’s GDP.

Agricultural exports:
It scraps Japanese duties on many cheeses such as Gouda and Cheddar as well as on wine exports. It allows EU to increase its beef exports to Japan and duty-free trade in pork, processed meat and almost duty-free trade for fresh meat. It ensures protection in Japan of more than 200 high-quality European agricultural products, so called Geographical Indications (GIs), and protection of selection of Japanese GIs in EU.

Automotive sector:
It addresses specific sensitivities of EU in this sector and elimination of customs duties in transition periods of up to 7 years.

Data protection:
The negotiations completed by both sides on this matter will complement EPA. Both sides recognize each other’s data protection systems as equivalent, allowing data to flow safely between EU and Japan and creating world’s largest area of safe data flows.

EPA removes vast majority of €1 billion of duties paid annually by EU companies exporting to Japan and number of long-standing regulatory barriers, for example on cars. It opens up Japanese market of 127 million consumers to key EU agricultural exports and will increase EU export opportunities in range of other sectors. In addition, it will strengthen cooperation between Europe and Japan in range of areas, reaffirm their shared commitment to sustainable development. It also includes for the first time a specific commitment to the Paris climate agreement.